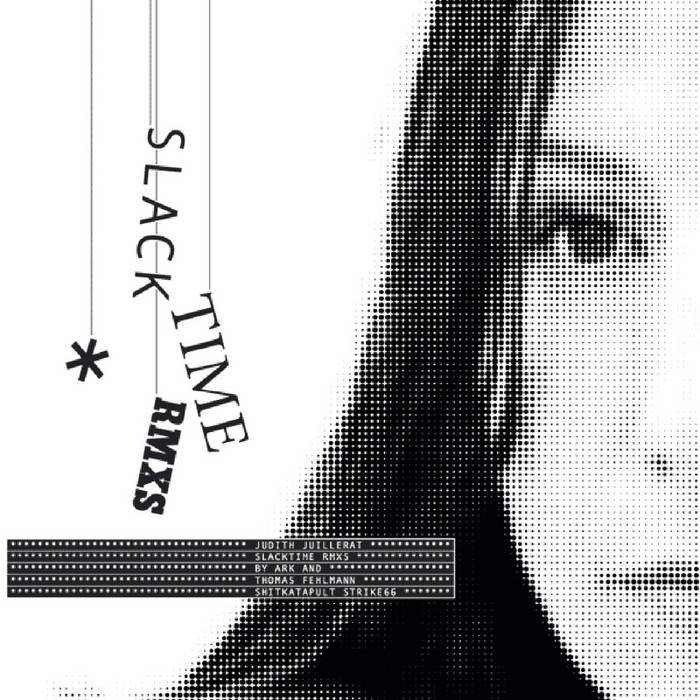 Here come the remixes of „slack time“, one of the numerous hits on Judith Juillerat’s debut album „soliloquy“, released on shitkatpult nov 11th.
Judith is definitely a late and solid gift for a scene that is known to be predominantly younger, male, and geeky. She opened her music to the public for the first time in early 2005, when she won a remix contest for Björks "Army Of Me" put on by Unicef, leaving 600 other contestants in the dust.
With its paradoxical casualness her music arrests attention and again and again turns out to develop an irresistible attraction making the listener become an ear-witness attending intimate and stirring moments: melodies composed with little bugs, a mature composure in tempo, the intertwining free flow, plus freely interfering fragments unfold an oppressing yet unrestrained beauty.

The remixes come from french funk master Ark and Berlin based multifunctionalist Thomas Fehlmann who both shouldn’t need any introduction. Both gave the track a nice treatment and translated Judith’s musical message in their very own musical language:

On the one hand french house weirdo Ark cuts the original sounds and elements in bits and pieces and rearranges them to a minimal funk dancefloor burner close to nervous breakdown in his very own typical manner.

On the other hand Thomas Fehlmann stays closer to the original delivering two slowly moving and hypnotizing tracks in an outstanding sound quality: „4/flow remix“ comes along with a 4 to the floor bassdrum and will be one of the rare tracks that bring these beautiful melancholic moments to the dancefloor when a DJ dares to go deep.
The „flow remix“ does not aim at the dancefloor and here Thomas Fehlmann proves his mastership in remix production work in technical as well as in artistic terms.
To the dark ambient feeling of the original track he adds the deepness of his personal dub universe and therewith delivers the secret hit on this 12“!

As an extra gift side A features an extended version of the original track.