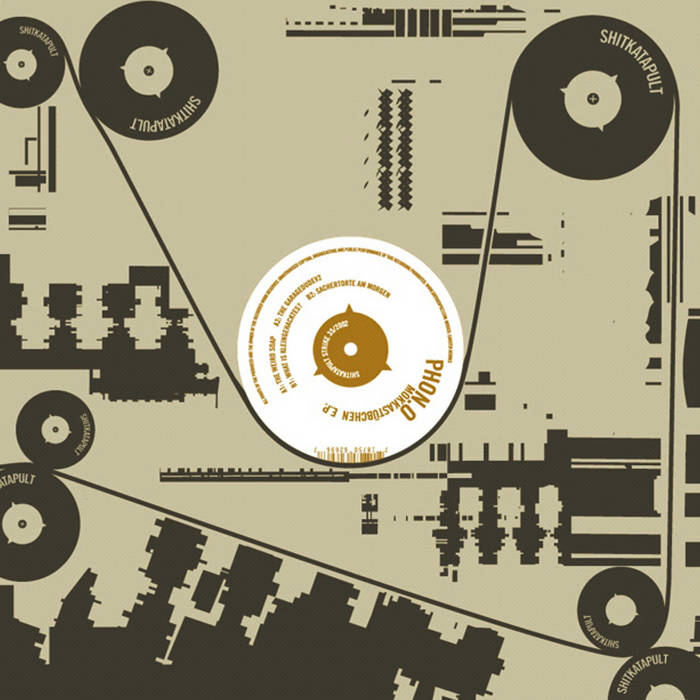 Phon.o comes out of his playpen with a crushing package and supplies Shitkatapult with four monstrous turds as lethal munitions – the shit is hot. This Berlin man has the digestion of a power plant and a rectum like pliers; one with which you could tweak the Eiffel tower. With that he serves up crude raw materials consisting of Hiphop and Breakbeats, Techno and Dub which become raucous monsters of an intimidating size. In „The weird soap tv show“ beats the size of a bat bang away in precise cut-up scratch scenes of a looped television. „The garagedude v2“ is a plowing, intelligent beast of a track even if it’s on the tragic side: it’s about a folk singer with an acoustic guitar who wants to cross himself via teleporter with a laptop in a self-made experiment; however he fails to achieve the materialization out of this digital make up. „What is kleingehacktes?“ is in no need of an explanation as phon.o skips in zigzag mode across the dance floor while slapping his open hand. Like a thunder-gnarz, the gadget takes apart the helium-suffocated last words of an MC who just asked the wrong man the wrong question. For dessert phon.o gives out a piece of „Sachertorte am morgen“ tasting best when consumed in a techno-armchair.

You can smell it all the way to America when phon.o releases his digital-pop flatulence. It’s no wonder that Kit Clayton demanded a stool sample for his label Cytrax, from which three tracks have already been completed. Mokkastuebchen is phon.o’s second EP on Shitkatapult and it really just has this title as camouflage. Were it ever to come to a celebrity death match in the states, a battle against Prefuse 73 would be promising for this 25 year-old German – the element of surprise being on his side.