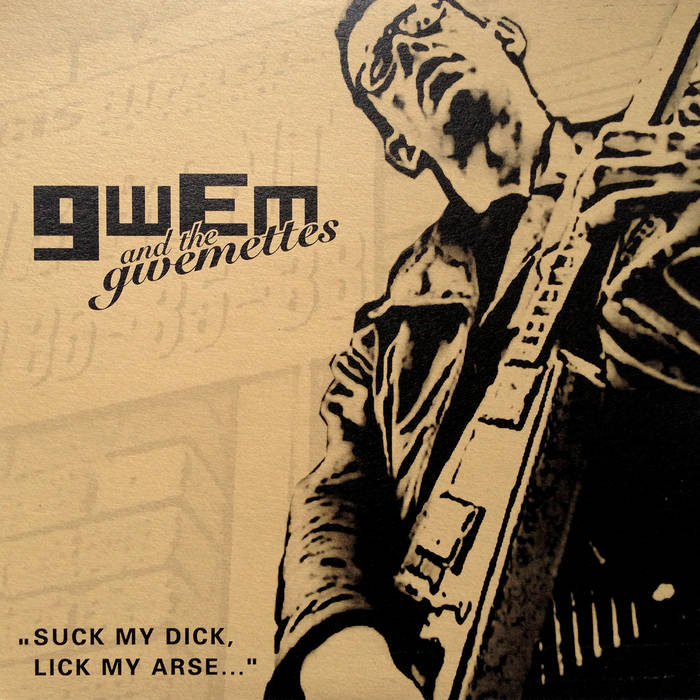 We know that Shitkatapult is really a fresh fruit of a young label, at least since the visit of that label-whore Hakan Lidbo two records ago. But now puberty is pulling all indexes by playing its flashy-blurry lil' game which raises some questions. For instance in the morning in front of the mirror: which zit do I squash first? There are those mean flaky perma-zits that are more of a flat-like growth and later leave amazing scars behind (see Jürgen Prochnow). Then there are those back-stabbing small overnight-zits that basically glow in the dark and attract all the attention of spectators: these you cannot leave standing, they've gotta go. Everything became clear when this mircromusic-glampunk-raverocker 'gwEm and the gwemettes' from London left two tracks on Shitkatapult's answering machine: these bruises have got to be released immediately. And which format is better than a 7" Single with two A(ss) sides on it? Gareth Morris (23) is a hyper-active bundle of nerves with some of those glasses on his face behind which your eyes seem tiny. He has his own label with two friends called ' Preromanbritain' that has released three homegrown vinyl discs so far. gwEm and the gwemettes is already a big star for worldwide fans of the musician platform miscormusic.net. His technical rider only asks for a hairstylist without him being ashamed of it. His musical humor spans all closely knit facets of pubescent dissonance -- rough and raw power surges and unrequited sex-blabber that come from teen-diaries with delusions of grandeur. On the wall there's a half-finished Seventeen-star-cut-out-poster of Scooter. On the bed you have Motörhead sheets. The arrangements are somewhere between rave and rock. So simple and earnest, even wound-up all crazy so that infantile madness has a method to it. This is no electronic music on the basis of a punk socialization, but rather punk music as the result of nerdy adolescence. This is Jackass for geeks.

On the A-side you'll find a settlement with all the yuppie-shit that appear to be a societal given, who don't seem to even change with hi-tech or the internet. 'FYMW' Fuck You Management Wanker has to do with a former boss of gwEm from when he once gave the office job a shot (before he worked at the grocery store stocking shelves). gwEm his big idol Lemmy from Motörhead introduces the song, and the therapeutic effect of the song unfolds by the time the comedian type voice of gwEm tries to stay in tact.
Frank Sinatra, the track on the other A-side, is a damn straight German Rave Blast Hit and has to do with how to become a star. It's especially about how stars get their dick sucked and ass licked, seeing themselves in limos, laughing with caviar and champagne about how Frank Sinatra is dead.

Shitkatapult dedicates this 7", that might carry the title 'suck my dick, lick my arse' ep, to all the nerds and nurses out there that shave for the first time at the age of 23.